“ROSHANI has possibly the most amazing voice you have ever heard!"
- FOCUS Magazine, Coffs Harbour

"ROSHANI was a music teacher, living in her van, who auditioned just once for a TV show and after her appearance on Australian X-Factor, went straight to the top of her country's Blues chart in less than a day! Truly wild."
- Pop Buzz Magazine

ROSHANI is a musician who can't be pigeonholed. Using loop pedals to lay down guitar, harmonica, keys and percussion and possessing a voice that gives you goosebumps, she timelessly crosses genres.

ROSHANI developed her one-woman show while living in her van, busking on the streets and traveling wherever the wind took her. Her mission in life is to inspire and uplift the world with song and story. We're thrilled she's coming back to Eastern Lounge to inspire us, after starring at Bluesfest.

"Performing and making music is how I connect to the world", says ROSHANI. "It's the pure joy that comes from performing that I love so much."

If anything, you could describe her music as a contemporary mix of R&B, Roots and Pop. It sounds familiar yet innovative at the same time. ROSHANI's live act is a real tour de force. She uses a range of instruments and pedals to offer an impressive one-woman-band show that reminds you of the technical prowess of artists like KT Tunstall and Molly Gene.

But ROSHANI describes her own music by quoting Louis Armstrong, who once said: “There are two kinds of music, the good and the bad. I play the good kind”. Her definition of ‘good’ music is music from the heart and soul. "It’s got to have feel", she says. "I don’t subscribe to any trends or a specific genre. I just write and create things that sound 'right' to my ears and then hopefully that translates to music my audience relates to."

Citing everyone from Bonnie Raitt, Nina Simone and Tracy Chapman as influencers, ROSHANI is a bona fide original. When she was asked to appear on X-Factor, the producers asked her to audition by singing a cover, but she insisted on singing one of her own songs.

Chris Isaak and James Blunt were blown away by 'Paid in Pink' and a day after performing it on the show, the song went straight to No. 1 on the Australian Blues Chart and remained there for the next three weeks!

"LamBros' music has a level of vulnerability to it and taps into a kind of emotional breaking point... but it's also wrapped in a motivating and feelgood energy."
- Charlotte Pope, SURG FM

Born and raised on the Northern Beaches of Sydney, LAMBROS is Connor & Harry Lambrou – two brothers who were introduced to music at a young age. Connor picked up his first guitar at 5 and Harry picked up his drumsticks at 7… and they’ve been playing together ever since.

When Connor and Harry were 14 and 16 respectively, they decided it was time to test their sound on a public audience and so started busking at Manly Beach. A massive stir occurred and a huge crowd was soon drawn in, among them a local gig booker… and just like that, they were thrust into the Northern Beaches music scene and soon were performing at pubs, festivals and venues all over Sydney.

The brothers love listening to and playing different styles of music, with influences ranging from James Brown, Led Zeppelin, Sonny Terry and AC/DC to Matt Corby, Chris Stapleton, Snarky Puppy, Tom Misch, Anderson Paak, Larkin Poe and many more. Their passion lies in absorbing sounds, techniques and musical styles, while being constantly on the search for new and exciting ideas.

Today, Harry plays a custom-built hybrid drum kit, including a homemade Australian hardwood stomp box, cajon and didgeridoo. Connor uses emerging technology and pairs a looper with a huge pedal chain and a custom-built acoustic guitar to create an enormous range of sounds.

The ‘LamBros sound’ is built on soundscapes, strong vocals and driving rhythms. You’re gonna love them! 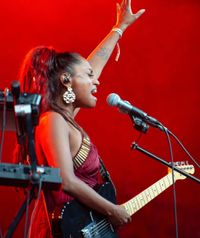 On Friday July 8, ROSHANI returns to EL. Voted the Breakthrough artist at this year's Bluesfest Byron Bay, ROSHANI's music is captivating and uplifting. She has a voice and presence that gives you goosebumps. She brings with her special guests and fellow Bluesfest performers LamBros - two brothers who seamlessly blend genres through their raw vocals and unique use of distorted guitar, percussion, didgeridoo and a thumping homemade hybrid drum-kit. Don't miss it when Bluesfest comes to Eastern Lounge! 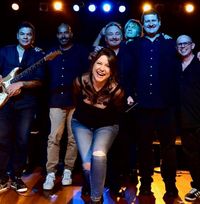 U.S. Blues Blast Magazine hailed KATE LUSH as the ‘Tsunami from Down Under'. This Australian Blues Chain Award winner has fired out consecutive No. 1 Albums In Australia & the U.S. as well as hitting the European charts. Last year, she hit the main Blues U.S. RMR chart at No. 11 alongside the likes of Norah Jones, Tedeschi Trucks, Taj Mahal, the Rolling Stones & Robert Cray among other greats. Described as singing “soul drenched blues”, her incredible soaring power and emotionally charged ballads make her one of the most outstanding vocalists on the world stage. This month she brings with her to Eastern Lounge one of Australia's finest guitarists, STEVE EDMONDS he of 'Hendrix & Heroes' fame at Eastern Lounge. This will be epic!